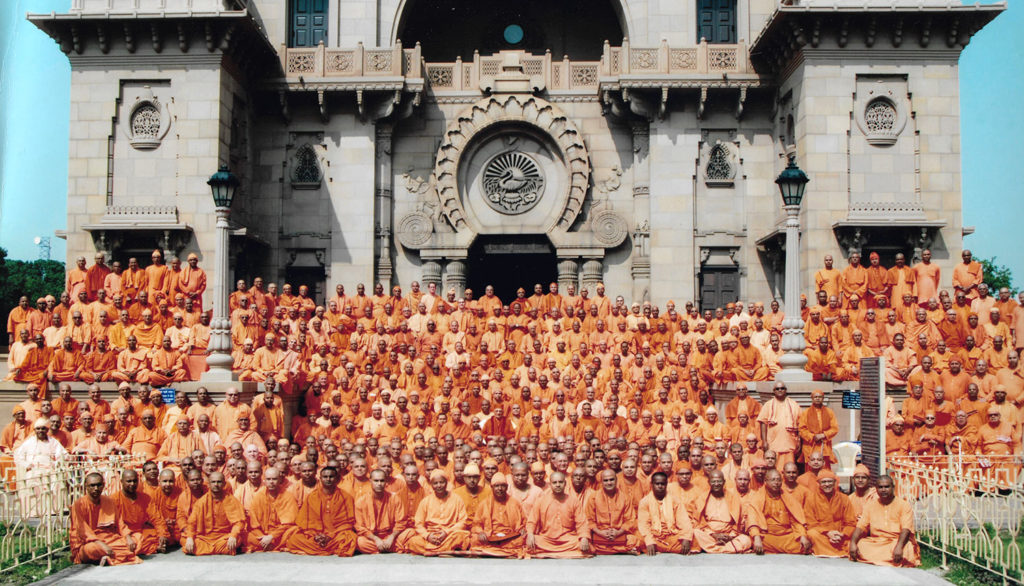 Women may kindly enquire at the branches of Sri Sarada Math, or of Ramakrishna-Sarada Mission.

In monastic life, as in community life, the individual is participating in the general group consciousness and is therefore propped up or pulled down by that consciousness as the case may be, according to the standard of excellence prevailing in the group. The new self-consciousness of being the member of a group of elite, together with a host of inhibitions like vows, traditions, dress, association and so on, raises a solid barrier of protection behind which even one comparatively weak can operate with sure chances of success, provided one is sincere.

Bhakti-yoga, Jnana-yoga, Raja-yoga and Karma-yoga (in other words, the path of devotion, the path of philosophical inquiry, the path of meditation, and the path of right action), all form the recognized Sadhanas of the Order. But work has special importance, because according to the rules laid down by Swami Vivekananda, every member, whatever his predilections, must do some work in the service of Sri Ramakrishna. Work cannot, therefore, be avoided in the name of pseudo-spirituality, and those who are of that mentality will find themselves misfits in the Order.

An organization, like a State, however, requires not only geniuses but also ordinary folks, not only leaders but also followers. In the Order of Sri Ramakrishna, all are therefore welcome, talented and highly qualified persons as also those who are not extraordinary, provided that they are attracted by the idea of living a life of renunciation and service. Renunciation implies the eschewal of personal ambitions, family relations, possessions, luxury, and sex. An individual can practice renunciation only if the urges mentioned before finding fulfillment in the higher satisfaction which devotional life offers.

Service implies the dedication of one’s energies and capacities to the works of the Order conceiving it as a symbol of Sri Ramakrishna. Spiritual talents are therefore more important than worldly abilities, but by the very nature and object of the Order, a harmonious combination of both is the ideal.

Monastic life, therefore, offers to persons having the required temperament, the best opportunity of developing their capacities and of living their lives in a way that will be of maximum benefit to themselves and the world at large. The conditions of life in the Order are such that anyone with the right temperament can easily adjust himself to them.

In the matter of food, clothing, and housing, no doubt, simplicity is the rule, but conditions are not prohibitively austere. Middle-class standards obtaining in the country are generally observed in these matters in the Math (monastery). Though the monks have no salaries or any other kind of personal income, all their legitimate needs are met by the institution (Order). The monastic vow of poverty, therefore, does not mean penury and indigence. So also obedience and discipline, while being fundamental in the monastic code of conduct, are not allowed to degenerate into servility and abjectness. While personal ambition has no place, and scope for great achievements is open to persons of ability and courage.

Swami Vivekananda lived and preached at a time when India was yet in political bondage. Young men were, therefore, naturally engaged in the struggle for political freedom in the belief that it would solve all our problems. After political independence was attained, we have now come to understand that it has no meaning without economic independence, and the country is, therefore, struggling for that through planning and industrialization. But sooner or later it will be realized that without moral, religious, and spiritual freedom—freedom from the animal in man—even economic freedom can offer no solace to the people. It is desirable that at least the more thoughtful sections in the country are prepared to face this disillusionment sufficiently early.

For the attainment of this spiritual freedom, the country requires a huge army of workers cast in the mold that Swami Vivekananda has prepared through the harmonious combination of Jnana-yoga, Bhakti-yoga, Raja-yoga, and Karma-yoga. The monastic Order is the great legacy he has left to posterity for accomplishing this purpose. Now that the country is independent, there are no patriotic obligations of as high priority as freedom struggle was standing in the way of the youth taking to a life of spiritual life and service. It is up to them to respond to the call of Swami Vivekananda, join the Order in large numbers and get their lives molded for special service in India and abroad.

For more details, please contact the Belur Math, Howrah Inquiry office or talk to Swamis of the Ramakrishna Order.